This week we are going to break down what we believe to be the best Batman covers from each era of comic book history – so expect this to be broken into four different parts encompassing:

Today we move on to

The Bronze Age contains most of my favorite Batman covers and the cover above is a good example of why: horror. I’m not only a big Giordano and Neal Adams fan, which makes me very partial to this era since it contains most of their greatest work, but I’m also a big fan of the Hammeresque horror stylization that this era was constantly infused with. On this cover we not only have the new Batman design; slender, heightened ears/cowl and the perpetual menacing grimace, but we also have an effective rendering of mad terror as the people Batman is pouncing towards, shriek and flee like victims. Add in the lettering of the title and we’ve arrived at what is basically a poster for a 70’s horror film. Delicious. 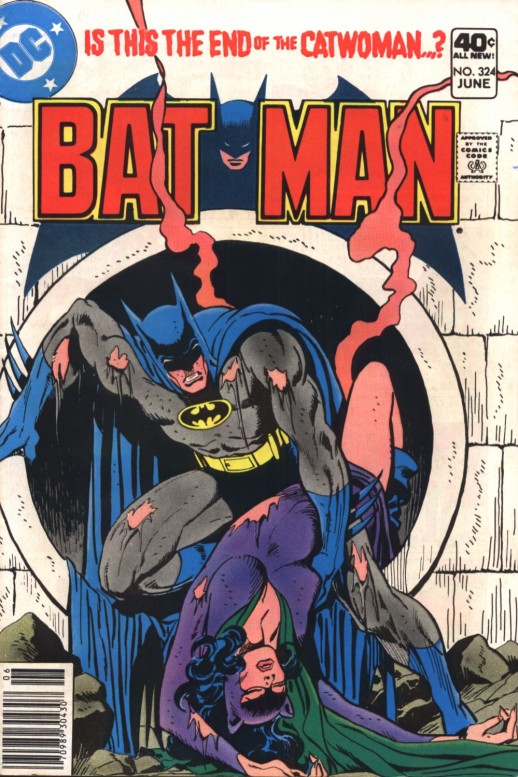 Wow, just the sheer amount of Freudian imagery contained in this cover is enough to make me put it on this list. Beyond that, I’m simply in love with the Bronze Age Catwoman look and I don’t think they’ve ever truly topped it. There is much to be said for the classical sensuality in the costume design and I really enjoyed her and Batman’s shared dynamic throughout this era.

Yessir, Neal Adams being a badass, once again. Robin literally disintegrating and turning to dust in Batman’s arms? Classic shit right there, son. Horror, mystery and intrigue, all drawn with a compellingly dramatic subtlety by Adams; the look on Batman’s face as he’s left staring at the dust running through his fingers is brilliant.

The Bronze Era gave us one of the greatest of all Batman villains: Ra’s al Ghul – and this was one of his early appearances, even still, you could already tell that this was one new rogue that had staying power.

Shirtless Batman lying, presumably dead in the sand with a “sword plunged into his chest” is a great disconcerting image for a cover. Why is Ra’s holding an entire Batsuit when Batman is still obviously wearing his pants? Who knows, but good god, Ra’s looks like a badass mother fucker while doing it. Neil Adams seems to have a long obsession with depicting a shirtless Batman, which he can still be seen doing in the current issues of his “Odyssey” run. Why? Who cares, it’s Neil Adams, the guy thinks the earth is hollow.

Not only do I think this is a great cover for the dynamic depiction of The Joker and Batman fighting on top of a building, but also because I love the way Simonson took the title and integrated it into the face of the building. Wrapping the letters around the angles in the architecture; the title, the declaration of what this book is, is at the service of the cover art itself, it has become secondary to this larger than life, epic battle between Batman and his greatest foil. 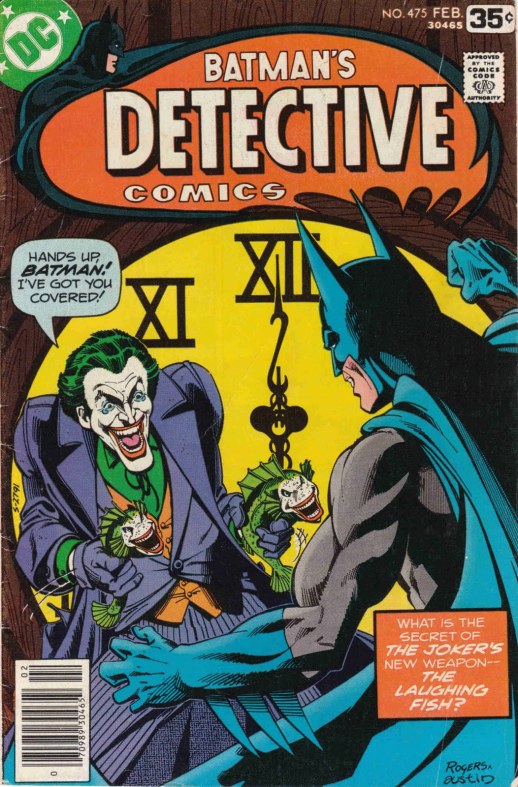 Oh, Joker and his laughing fish. What an indelible, surrealistic image that just sticks into your mind and never wants to leave.

It sounds ridiculous, and of course it is, but the story itself is rooted in realism believe it or not (as much as Bronze Age Batman stories were anyway) and is fantastically told. All in all this is an essential Joker stories that every fan should read. This two issue arc (completed in ‘Tec 476 below) comes near the tail end (pun intended) of the much loved “Strange Apparitions” TPB collection of tales. A classic cover for a classic story. 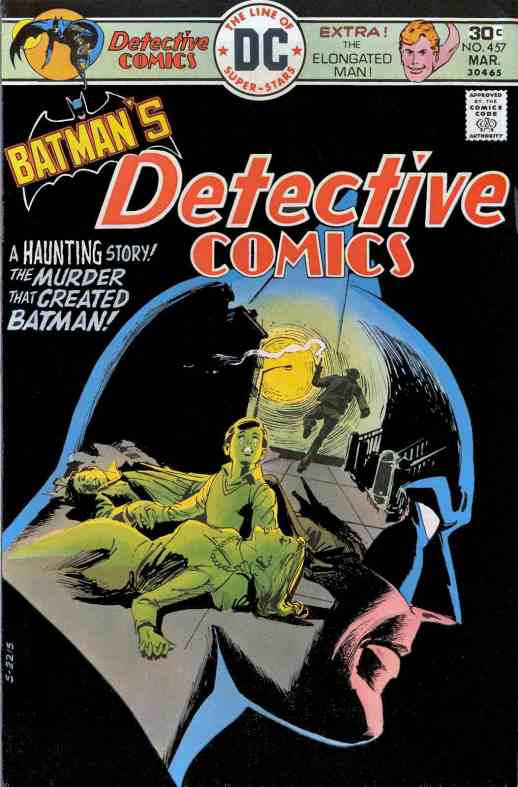 A man, running off into the night, smoking gun in hand, while a boy watches his parents die – seen as memory.

Denny O’Neil considers this the best Batman story he ever wrote, whether or not I agree with him isn’t important here, because one thing is certain – it is a great fucking story. This is the first time anyone ever really attempted to go in-depth and explain Batman’s origin, and it wouldn’t be topped until Frank Miller tackled the topic with his Year One saga a decade later.

As for the cover, well, it’s just absolutely haunting. Framing the Wayne murders inside the confines of Bruce’s head is an eloquent visual metaphor which is quite apropos for a story involving Batman visiting Crime Alley on the anniversary of his parents death and still trying to process the pain and the loss. This is the first appearance of Leslie Thompkins as well, which has become a canon character (well, I’m not sure about in the new 52, but fuck the new 52, so who cares) – the kindly old woman who became a surrogate mother figure for Bruce added some depth and structure to the unfocused fragility of a young Bruce Wayne’s psyche for the readers – and the character has been the richer because of it ever sense. 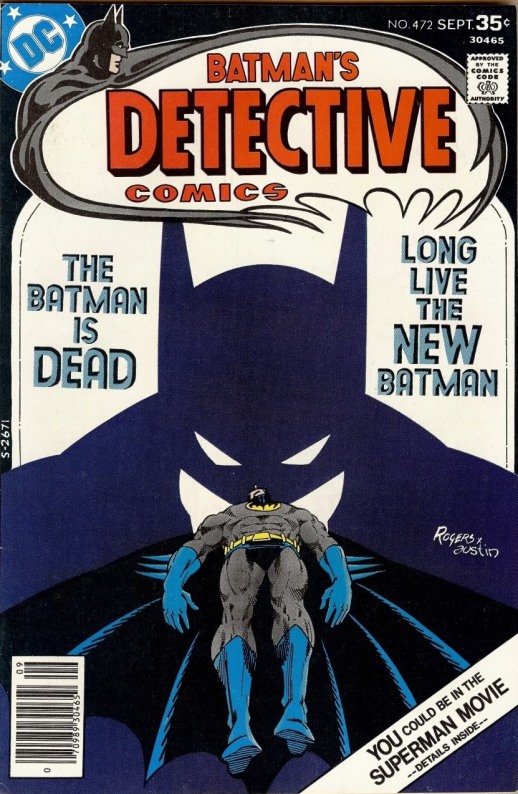 Iconic in both writing and in image, this cover has always stuck with me through the years. I find it brilliant; the corpse (?) lying at that great angle in front of the familiar silhouette of the Batman just sends chills down my spine and the muted, almost monochromatic color palette of the background is a great choice for this image as well, it helps enhance the morgue-like feeling with its deathly pallor. 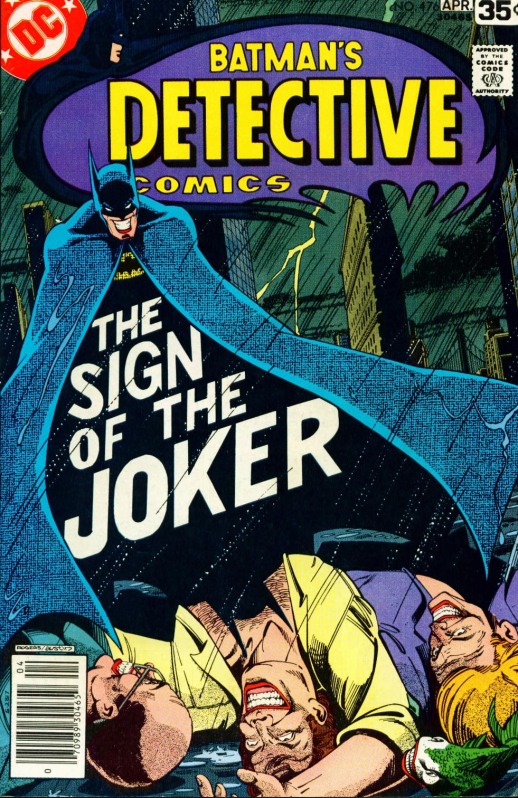 I think this is actually my favorite Batman cover of all time. I remember as a child, when I first started regularly buying comics, the small, crappy comic shop in my home town had a copy of this up on the wall behind a counter. Every single time I went in there it drew my eye. I asked if it was for sale once and I was told it wasn’t…  sadness ensued, but I learned to march on without owning it; simply being in its presence once or twice a week was enough for me. Regardless, now in my adult life I’ve actually owned two or three different copies of this book, always turning the one I own into cash when I found a new copy to buy that was in better condition. I think I’m sitting on about a 7 or an 8 right now, but good god, one day I will plop down a few grand to get a 9+. A few grand? Yes, this is a rarity in the collector’s world.  You see, there is no good reason why this comic book should pull in that sort of price; nothing of any real note happens, no long-term, recurring characters are introduced, none die – and the book was not made in any lesser quantity than any other issues at the time.

People love the cover and it has become a big collector’s item just because of how fucking awesome the cover art is.

For those of you paying attention, yes, this is a direct homage/rip-off/re-make of Detective Comics #31, which was held the number one spot on my best Golden Age covers list. Yet, even the fact that it is a re-hash doesn’t lessen the appeal one iota to me. Even when it’s been re-done since, I still find it compelling, regardless of the direction that someone takes it in.

Neal Adams is a genius for the style he brought to Batman in the 70’s – without him we would not have the Batman that we have today, his influence along with a few other, key artists and writers have given us the definitive dark knight detective; the man is legend – and this right here may be, in my humble opinion, his most indelible addition to the medium. Bravo, Sir.

Oh yeah, that’s right, the “Paul is dead” conspiracy  craze was so prevalent in its’ heyday that even dear old, Batman couldn’t resist trying to solve the mystery. Of course, DC couldn’t really afford the licensing to use the actual Beatles in the story so here the band is called “The Oliver Twists” – the mystery we’re presented with here is boring and the whole thing reads like such an obvious cash-in on the vogue and “hip” story of the time that it’s kind of silly in an unfortunate way that silly Batman stories usually aren’t. But hey – hilarious cover!

This one tickles my pickle just because of the title, “How many ways can a Robin die?” – which is hilarious because they’ve “killed” Robin off on so goddamned many covers over the years that this seemed to be a ‘wink-wink nudge-nudge-know-what-I-mean’ sort of inside joke. Good times.

This cover is actually really great and should probably be on the above list proper – but the whole concept of Joker using Batman, et al. as candles on a giant Joker cake makes me kind of deliriously happy. So here it lands, on the funny side of the line.

Jeesus, Batman! Why in the hell did you let some random dude be “Batman for a night”? That was pretty damned irresponsible of you, it killed his sister. For shame, Bats, for shame… 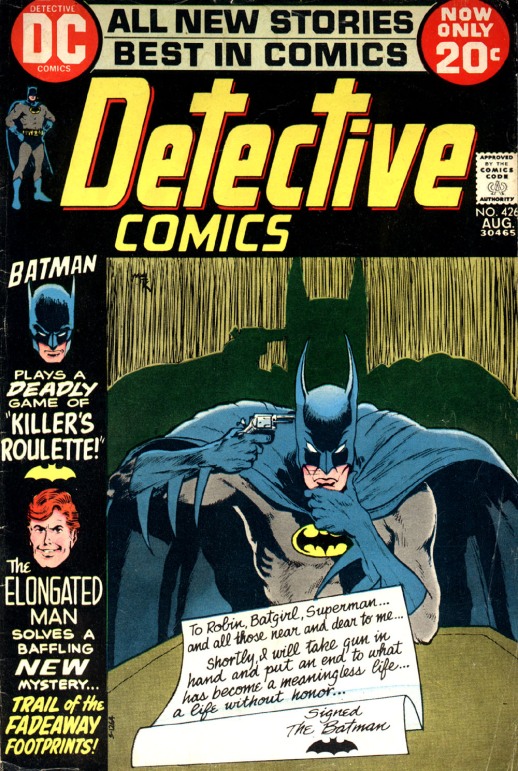 Suicide is not funny. But for some reason when Batman threatens it with an oddly tiny gun, it is. Deal with it.