UPDATE: Microsoft, did a 180 on most of these policies – so Google that shit for the current standing of these awful sounding features. The people spoke with their pre-order numbers and Microsoft changed tact. But for posterity’s sake, here is the original unaltered article as originally published:

Microsoft has shown their hand, finally after weeks of unbridled speculation and misinformation they’ve cleared it all up: They’ve come to fuck us over. They’ve proudly shouted their plans from atop their ivory tower and have allowed their golden nectar of knowledge to trickle down to us, the fortunate, unwashed masses.

This is not an evolution in gaming, this is an evolution in corporate greed; an unmitigated brick to the face of every paying, loyal consumer which Microsoft has cultivated with their last two consoles.

Microsoft released the official FAQs (spread across multiple posts no less, so it is very convenient for people to find all their answers in one place of course! /s) for the Xbone, and they are a doozy, so instead, let’s all save time by looking at this handy infographic which bullet points the verbal ass rape: 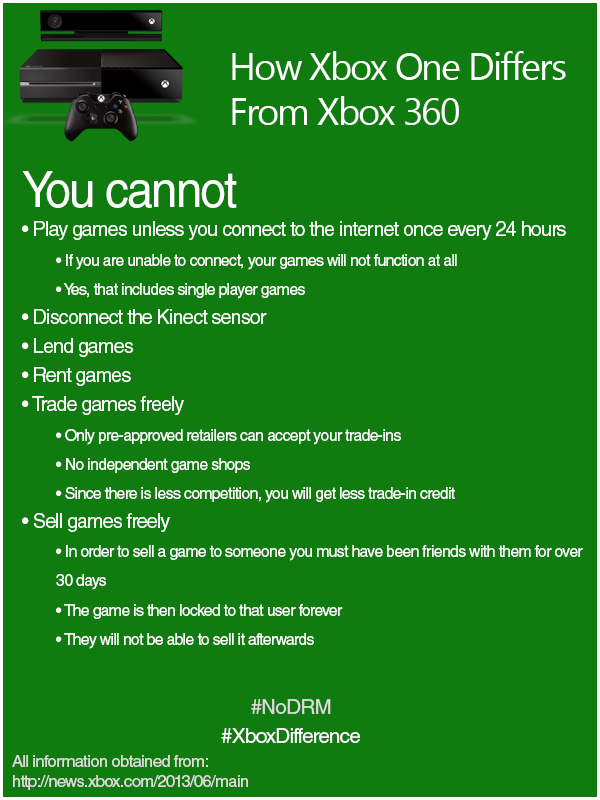 But wait, it’s not ALL bad, for instance:

Share access to your games with everyone inside your home: Your friends and family, your guests and acquaintances get unlimited access to all of your games.  Anyone can play your games on your console–regardless of whether you are logged in or their relationship to you.

What? HAHAHAHA! The fact that they are even selling this as a feature is fucking insane! Anyone inside my own house can play games on my console? WOW! What a huge leap forward for the industry! Thank you, Microsoft! As long as we can play our own games in our own homes we should be grateful, that totally makes up for the fact that  we shouldn’t be able to lend out or give away old games – that’s just madness, after all it isn’t like there is some sort of precedence set to counteract this sort of corporate control.

Surprisingly enough though, there is one tidbit that sounds actually pretty damn great:

Give your family access to your entire games library anytime, anywhere: Xbox One will enable new forms of access for families. Up to ten members of your family can log in and play from your shared games library on any Xbox One. Just like today, a family member can play your copy of Forza Motorsport at a friend’s house. Only now, they will see not just Forza, but all of your shared games.  You can always play your games, and any one of your family members can be playing from your shared library at a given time.

Of course, it goes without saying that this concept goes against every bit of locked-down draconian DRM they’ve built into this system, so this has got to have some warped monkey paw-esque twist to it somewhere. The possibility for abuse is just too damn high on this feature. I’m sure the other shoe will drop and it’ll be something completely insane, like Kinect taking blood samples to verify the DNA of family members…

Speaking of Kinect, let’s bash that poor pitiful pile of horse meat one last time, shall we?

The main problem I have with Kinect is that, even if you can “turn it off”, you still can never unplug it from the console – or your Xbone will cease to function. Now, please, I know I’ll be accused of being a tin-foil fucktard, but ask yourself one simple question: WHY?

Why indeed, I don’t trust Microsoft any further than I can throw their gigantic oblique cable box and this component is extraordinarily unnerving in light of all the PRISM NSA stories breaking right now. Especially considering that Microsoft was one of (in fact, the first) the main corporate partners to sign on with the PRISM  program.

PRISM works by searching for keywords, spoken, written, etc., once it finds any of those words or combination of words then you are flagged, logged and permanently surveyed.

If it doesn’t unnerve you that this corporation, with this history wants to put a sophisticated surveillance device in your living room (and charge you for it no less!) then you should probably buy the Xbone because you’re a fucking idiot anyway. Yes – an idiot – because you are obviously not of sound mind if you think this is nothing to worry about. History will not be silenced and history proves this is never a good position to be in. 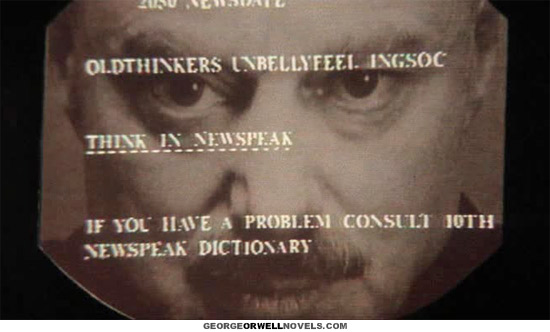 But okay – okay what if I am just being paranoid? Well then, how about this argument:

You’re about to put in your brand new copy of “Jingoistic Shooter 18” and as you insert the disc for the first time into your Xbone you accidentally knock your Kinect from the shelf and it falls to the floor, breaking. Or what if the thing just has a high failure rate, gets a power surge, etc. In any event let’s just say it breaks – plain and simple for what ever reason. Well guess what? You cannot play your brand new game because your Xbone does not function at all without a working Kinect. So, you’re fucked. You get on the phone and Microsoft graciously offers to send you a replacement unit, but of course it will take a bit to arrive… there goes your weekend of playing that game you were so looking forward to… there goes your week, there goes EVERYTHING until you get a replacement.

This is absurd. To make a small camera be necessary for the larger system to function is just begging for trouble. It is a serious “flaw” designed to do one thing – make sure you keep a nice, health Kinect sensor plugged in at all times.

Let us extrapolate this scenario a step further:

What happens when Microsoft does maintenance? Are you able to play your games? What happens if Microsoft’s servers go down? What happens when the first inevitable DDOS attack is successful? People like to give the PSN shit for when it was down for two weeks after a DDOS attack, but you know what? You could still play any damn game you wanted to at any time. In this case you’d simply be able to use it as a cable box pass-through and a bluray player.

Further? Well what about when this generation is long gone – what becomes of all the games you purchased for your Xbone? If the servers are closed how will you be able to do the daily/hourly check in and/or benefit from all these amazing “cloud features” that some games will utilize? Is this the first console with a definite end, with no archival preservation of the games at all, a perfectly planned obsolescence? The Xbone is the only piece of consumer electronics that has the feature built in that causes it to brick itself intentionally – how could anyone – ever – support this sort of thing?

And while we’re on the topic of being able to play blurays on your non-game capable gaming console, then why in god’s name are blurays and films not subject to the same scrutiny as games? Why do we not need to continually verify that we’re watching our own legitimately purchased films from an approved Microsoft seller or re-seller?

Oh, wait! Yeah, that bodes well. After all:

“…Microsoft may change its policies, terms, products and services to reflect modifications and improvements to our services, feedback from customers and our business partners or changes in our business priorities and business models or for other reasons. We may also cease to offer certain services or products for similar reasons.” 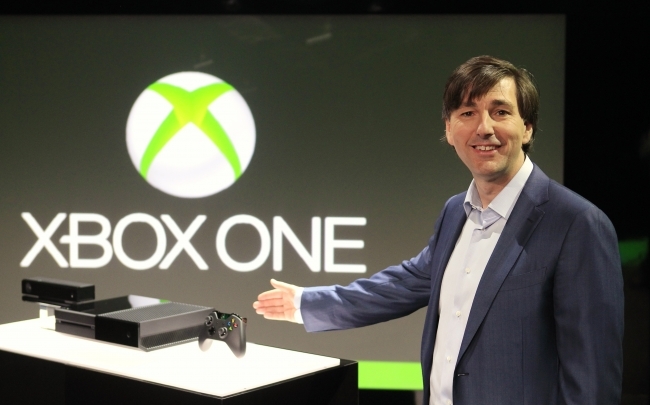 The Kinect 2 is designed to fit comfortably into your colon with or without lubrication.

I bet you have to have a gold account to be provided lube for your daily fucking.

So, hopefully this will help even the most diehard of Xbox fans to at least hesitate buying this crazed beast of a console. I won’t even bring up the ESRAM concerns or anything else to do with its specs comparative to the PS4, because honestly – that does not matter. Good games matter, but you know what suddenly matters even more? Standing up for certain ideals.

Because when it comes right down to it, the only real recourse any fervent Microsoft apologists have to fall back on is the whole, ‘it doesn’t bother me because it doesn’t affect me’ argument. Well, to that I say:

Break out of your solipsistic loop. Just because it doesn’t affect you doesn’t mean that other people who it does affect are any less relevant to the discussion. You need to take a stand for consumer rights in general; the more people who say this is all acceptable practice help to drag the entire industry down a road where things will only become more and more corporation friendly, as opposed to consumer friendly, in an age where just the opposite should be happening.

If you’re willing to overlook all the negative aspects which the Xbone represents for the industry as a whole for simple, disposable experiences (truly disposable this time since eventually, you’re entire catalog will be rendered inert) then you are exactly the sort of consumer Microsoft is selling this machine to; those swayed by the shiny object. They’re banking on your inherent trust in a brand name – which means, they think you’re stupid enough to think they have your best interest at heart. They are betting on willful ignorance based on nationalism, apathy, laziness and the love of Halo. We’re now expected to be a performing monkey, jumping through elaborate hoops just to play the games that we fucking bought. Publishers are so sensitive to the fact that people are not compelled to pay full price for their games or keep them beyond a rental, so they will now force our hands. The real truth behind this fact however, is that publishers are churning our rote banality; they are unable to create enduring and compelling pieces of interactive art, so the focus this last generation has shifted to a multi-player heavy, continually running collection of basic mechanics infused with constant DLC updates and online pass requirements.

Further reading: My initial reaction to the Xbox One announcement.