Well, Batman Inc. is kind of getting short shrift from me this month due to other engagements, so this is a stream of consciousness review and not heavily edited – yet, come on, you know what I’m going to say… but hell, continue on reading anyway!

This was a fantastic issue filled with a myriad of plot points which were compellingly structured and full of emotional impact. The entire issue flashes backwards, forwards and ends in the present. We get a few questions answered, a few more raised and we even see the triumphant re-conviction of the always enjoyable, Squire who decides to now take up the mantle of The Knight.

Elsewhere, Bruce and family hold a private funeral, to bury Damian and, upon first glance, I assumed this was the wrap-around from the very first scene of volume 2 as seen below: 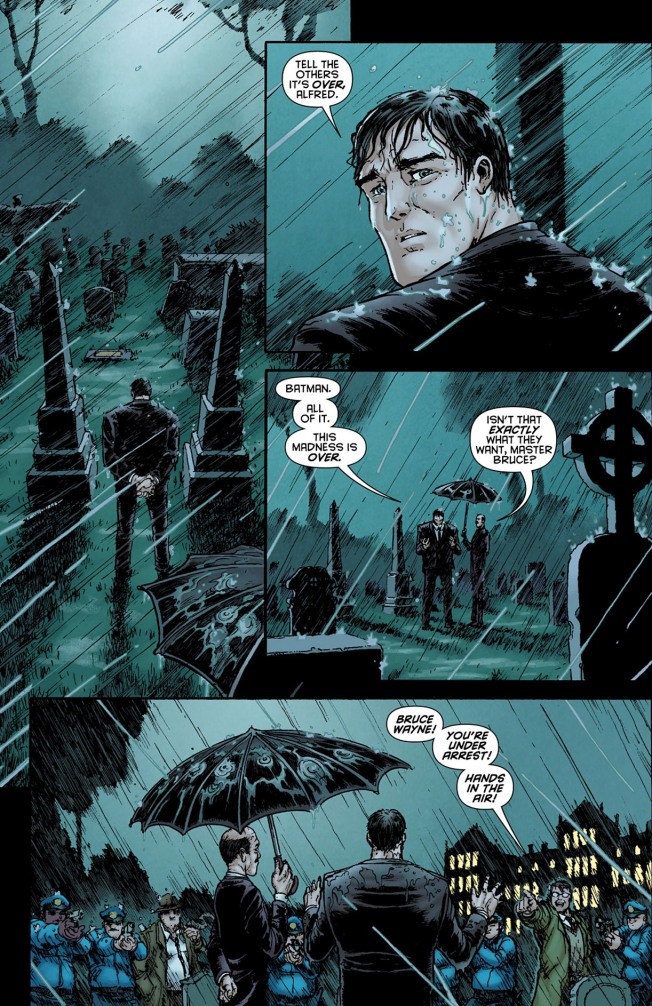 Yet this cannot be, as there is only one grave in this issue’s graveyard scene –

– this is significant. Of course, it’s also obvious because only Bruce and Alfred are there and Bruce’s face isn’t smashed to hell.

So we have not yet wrapped back around to our beginning like the ouroboros… Meaning one more person will die before Morrison’s run concludes.

My money is either on Jason Todd – but not incredibly likely, as killing off a character that carries their own book is probably a no-no according to DC editorial, so my real guess would have to be… Talia.

The scene above seems to obviously foreshadow the discontented rift between her and her monster assassin.

This may also make the fact that the British Prime Minister was being briefed on one last active Lazarus Pit somewhere in the world rather significant, as I have a feeling Talia’s body will disappear before the final conclusion of Morrison’s tale and we’ll be left with the indication that the Al Ghul family is indeed being, quite literally, reformed.

Between all of the above, we’re also presented with the brutal conclusion to last issue’s sudden cliffhanger as Bruce, Dick and Tim all are afforded some truly badass moments of emotionally charged brutality by systematically beating down the Heretic in the lobby of Wayne Tower.

We also learn that Leviathan is still holding Gotham City hostage and the local Government officially labels Batman as a criminal, as such the entirety of Batman Inc. goes dark. 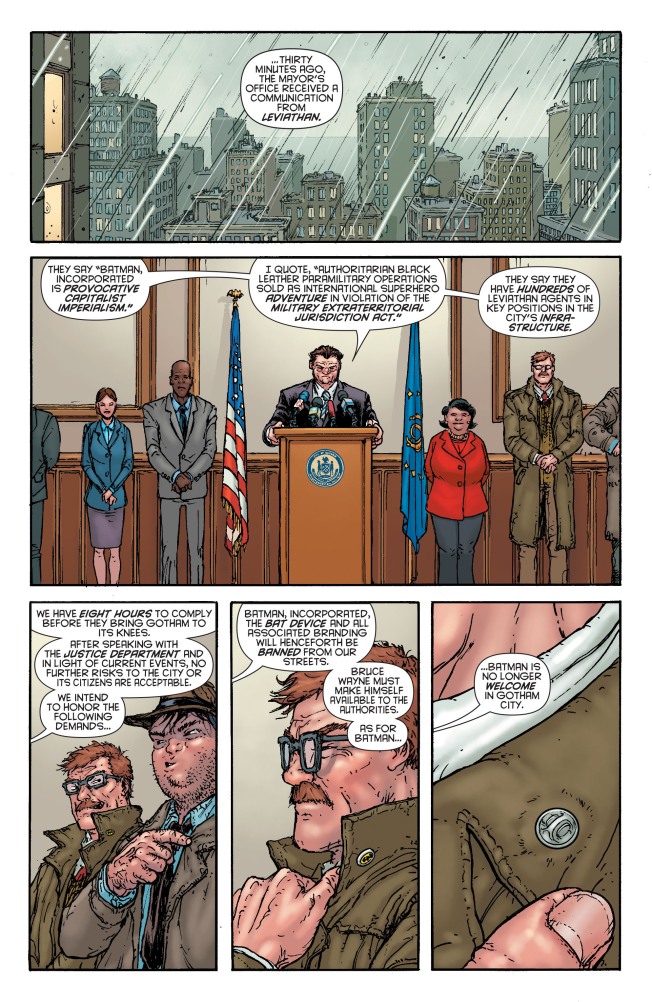 The issue ends with a very touching and quiet moment with Bruce alone in the Batcave, being unexpectedly reminded of not only Damian, yet Damian’s character; the sort of boy that he was.

It’s a goddamn amazing trick that Morrison can manage to throw me off emotionally with what seems like such an innocuous and brief moment.

All in all, this is a fitting requiem and a stirring end to an act, while propelling us into the story’s final act, which promises to be filled with the highest emotional stakes any of the characters have faced since Morison’s story began. Morrison has very effectively given every character fully realized motivations and has oriented them all in this complex tale so well that I have nothing but the utmost confidence that the final part to this epic tale will be as masterfully composed as everything which has preceded it.

As always – if you’re not in the know – catch up with Morrison’s epic story!

Five out of Five