Batman – Return of the Caped Crusaders is the first DCAU film I’ve even remotely had a desire to watch in the past year or two. After the godawful Son of Batman, Batman vs. Robin, Killing Joke CCCCC-combo I was not looking forward to wasting another 90 minutes on DC’s weird fetish with making Batman as lame as possible on film (BvS: DoJ deserves a lot of credit for my hate here as well, but I digress). Regardless, the central conceit – that they were making this as a tongue-in-cheek love letter to the 60’s television show was enough to pull me back in. The good news is that it wasn’t a wasted trip, because this is the first Batman film in a long time that didn’t leave me feeling like I don’t even enjoy the character anymore. “Return of the Caped Crusaders” isn’t perfect, mind you, but it was good enough to warrant its existence, which is increasingly rare for me to admit in today’s Batverse.

Full disclosure: I’ve always loved the 60’s television show. Growing up in the 80’s the reruns were on television frequently so I watched pretty much the entire run as a child. As I matured and really started understanding Batman as the character portrayed in the comics of the 80’s and 90’s, I realized the 60’s show was completely ridiculous. Yet that didn’t make me dislike it one iota, it just was… I had read Gold and Silver-age Batman comics and enjoyed them. The campy, ridiculous Surrealism of it all was great fun and I never once stopped to think “Why isn’t he brooding more?”….

My chief complaint with Batman and the subculture of fans which are so heavily invested in it, is the way in which said fans obstinately proclaim Batman to be one singular thing. In most cases, it can be described as “dark”. Yes – the idea that a grown man dressed in a Bat costume punching evil clowns must be taken deadly serious. How absurd and boring. Blah. Now Batman in films, games and comics is some sort of hulking, armor-clad Militarized idiot who never deduces anything beyond the obvious and solves every problem with punching and guns. 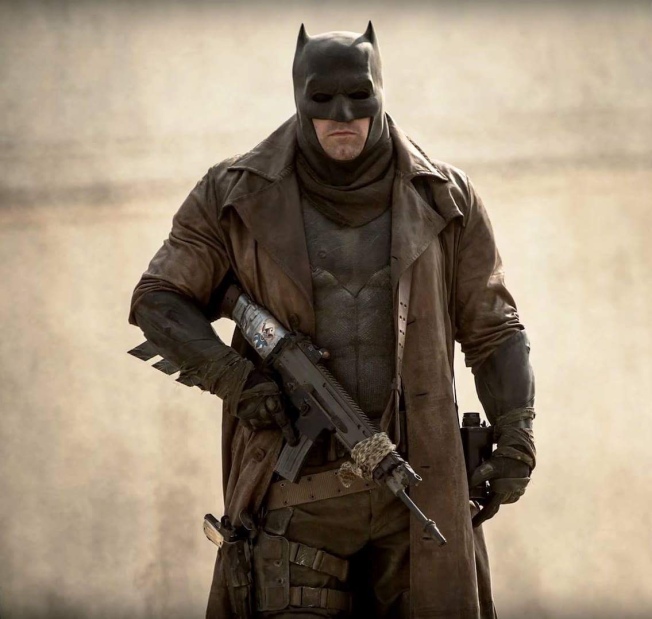 Yes – I know it was a goddamned dream sequence

Now, don’t get me wrong – I love “dark” Batman – IF it is told well… because here’s the thing: I just like well told stories.

The character of Batman has, for the majority of his history, been portrayed in all sorts of utterly ridiculous manner in every medium possible, yet for some reason everyone assumes the character needs to be serious now. I think he can be whatever the writer wants him to be as long as they follow the main rules of the character and tell a compelling tale. SO – that all being said, I’m glad DC decided to undertake this new animated film. I’m also pleased that fans seem to be receptive of it (but with dreck like Killing Joke out there it’s not hard to see why fans would be open to something different).

Well let’s get to it then – how is the film?

It’s good. Not great, but certainly not terrible, and definitely the best Batman film in ages to boot. 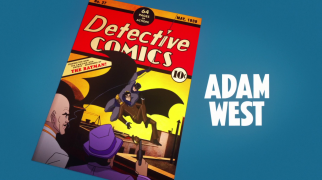 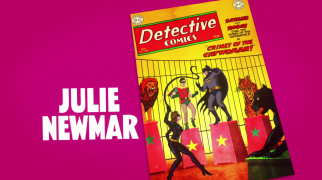 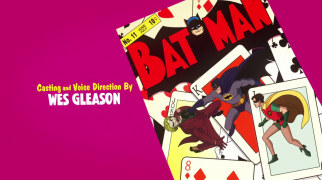 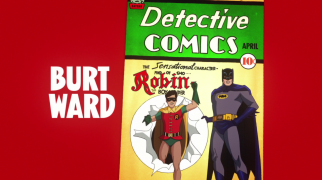 It starts well, with an opening credits sequence that brings some of those aforementioned gold and silver age comic covers to life.

The film proper begins by reuniting the same group of villains from the Batman ‘66 film – Joker, Riddler, Penguin and Catwoman. The actor playing The Riddler does a commendable Frank Gorshin impression, as does the Burgess Meredith-esque Penguin. 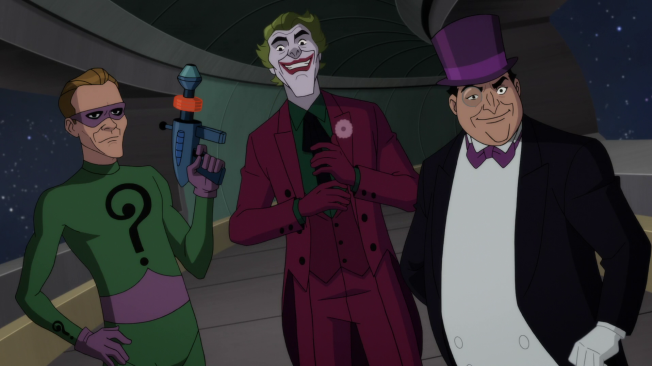 However, to be honest, the worst performances come from the original actors reprising roles. All three of them, West, Ward, and Newmar all sound positively geriatric, and their performances pulled me out of multiple scenes due to how stiff and sluggish they sounded. Not that it was unbearable, they all do a fine job, it just doesn’t fit with the look of the characters. I get why the filmmakers made the decision to have them reprise their roles, and I’m glad they did, I just wish it would have worked a bit better in practice.

Outside of the way the actors perform their lines though, the general writing was good and filled with plenty of call-backs to previous iterations of Batman, all while playing with the goofy innocence of the original show. They definitely make every effort to remind us just how “quaint” the tone of the original show was, but they never seem to be mocking it, just lovingly poking fun at it. The giant TV dinner (complete with GIANT OVEN) death-trap perfectly encapsulates the mood they were going for. Why does this factory have these things?

The ridiculous amount of alliteration in the script was well appreciated, because I thought it was an integral part to the old show’s writing style and charm, so it went a long way to selling the accuracy of the while thing. They even fit in Catwoman’s odd desire to grind up against the scenery while the men fight it out… lot’s of small touches like that go a long way to proving the writers know their shit when it comes to ’66.

Plus, the subtle (and not-so subtle) shout outs to various other Bat-renditions were pretty good – “Let’s get nuts”, “… and I’m the surgeon.” (this one comes complete with The Dark Knight Returns heaving fight stance). Of course, the best exchange of all, when Catwoman asked Batman to run away to Europe so they could sit in a cafe sipping tea, which caused Robin to exclaim in Robin-ese ”Holy unsatisfying ending!” Funny stuff and well played.

The animation was a step up from other recent films, such as – oh, I don’t know… The Killing Joke! Think about that for a second. A 60’s Adam West Batman cartoon was more expertly crafted than the most requested book adaptation DC has ever had in their stable. What the fuck is up with that? While The Killing Joke looked like flash animation a lot of the time, ‘Return of the Caped Crusaders’ looked like a genuine cartoon. Just watch the end credit roll as Batman and Catwoman dance for the duration – that throw-away bit of the film has more technical expertise than the entirety of The Killing Joke. The fight scenes looked good as well,  complete with those signature pop-art onomatopoeias. 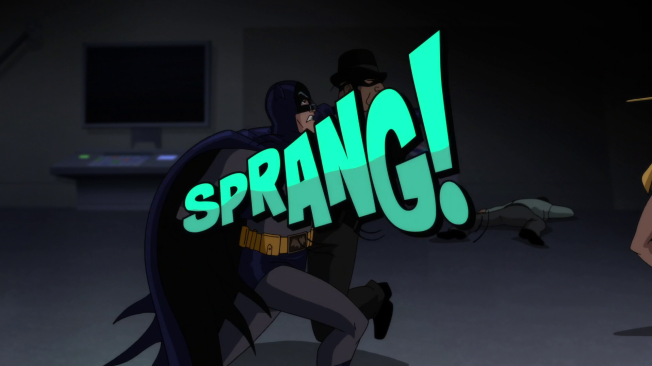 They missed a huge opportunity with this one by not having Batman kicking the goon in his Dick.

The plot takes a turn I wouldn’t have imagined and although it’s been done before (Batman turns evil!) it was slightly augmented by making HUNDREDS of Batmen turn evil. It provided a lot of meat for Adam West to chew on, and being able to subvert his squeaky-clean Bat-image for once was kind of endearing, especially after all his talk about moral fiber and the code of law early on in the film. Batman goes around Gotham replacing everyone with a Bat-clone because he knows he can do a better job at whatever it is they do for the city, so we get shots like this with Batman wearing a pearl necklace pushing a stroller down Gotham’s streets: 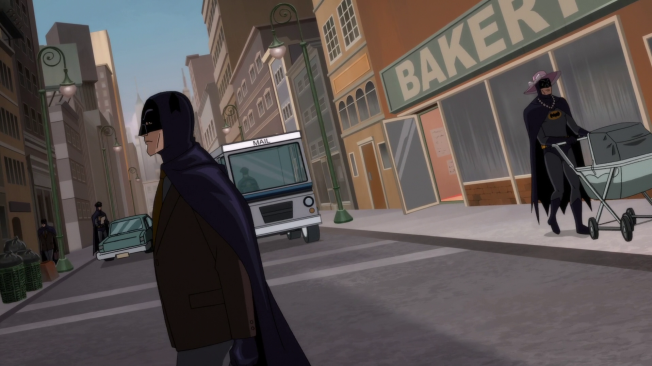 He even replaces a baker because, “baking is more a science than an art.” Silly and fun. 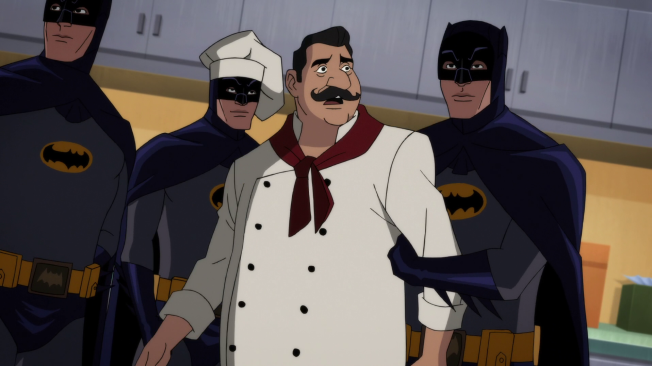 Look at me: I’m the Cake Boss now.

Eventually, Bats, Robin and Catwoman team-up to stop the other three villains in a sequence that channels the ’66 film perfectly. 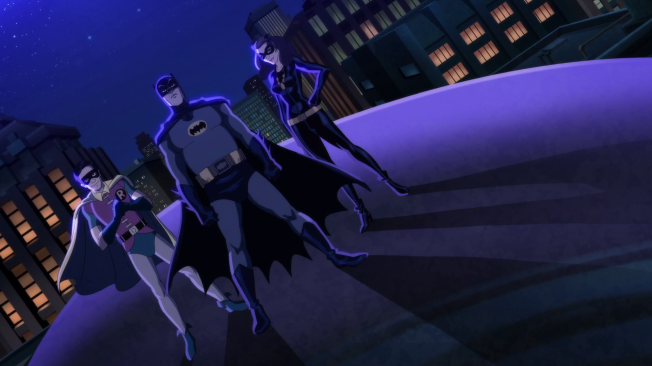 The reliance on goofy Batgadgets as deus ex machina became a little blasé after the tenth time they utilized it to infuse some humor, but overall I can’t blame them… it was a big part of the original show as well. Speaking of the original show I really liked the fight scene which provided us with tons of cameos from some of those forgotten foes from the television show. 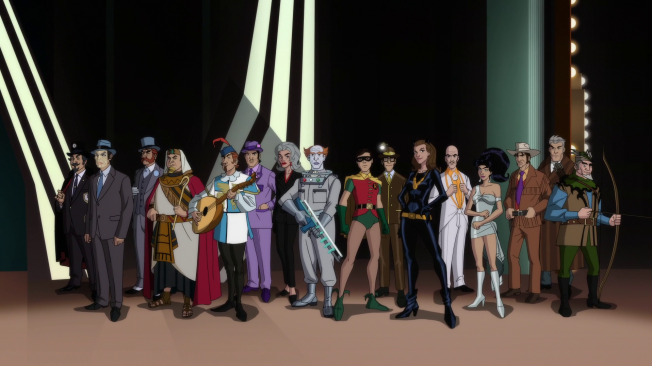 Taken as a whole, I think the film is absolutely worth seeing and makes me hopeful that DC is starting to realize they don’t have to keep the character so damned dour all the time for fans to respond positively (hello Lego Batman). With that being said, I’d definitely recommend you check it out for a fix of non “I take myself way to seriously” Batman. That is probably what this film’s greatest achievement is: being the perfect piss-take for the entire “Batman must be serious” crowd, taking the premise and dragging it back through the colorful eye of a classic rendition of the character – writ large as camp entertainment. Dude, I’m so serious… just look at this pose: SO MUCH GRAVITAS

Things I would have loved to see:

Final Score: Four out of Five 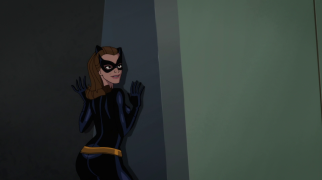 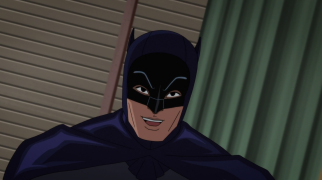 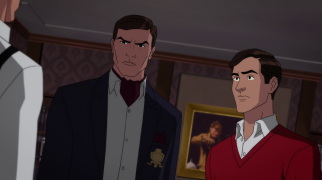 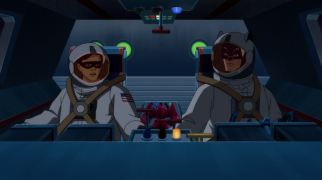 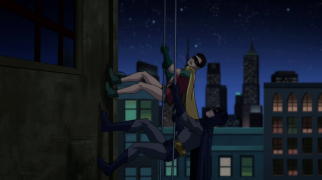 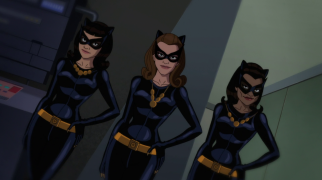 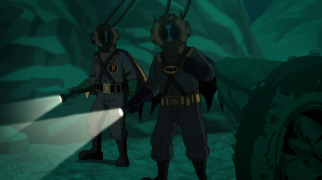 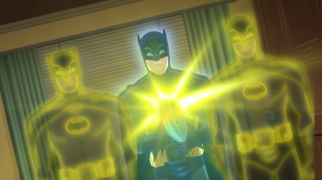