"The All-New Batman: The Brave and the Bold #13" Written by Sholly Fisch Art and Cover by Rick Burchett and Dan Davis.

I am a big fan of the cartoon series, but I have yet to read one of the comics… if they manage to transpose even a quarter of the brilliance from the cartoon into the print medium then I may end up having a new title on my pull list. While many derided the cartoon series itself for being too “kiddy”, I found it extremely well-written, fun, intelligent and full of brilliant and easter-eggy nods to DC history. In short, I found it to be very mature (not in a blood and guts and sex sort of way, but in an intelligently created piece of art sort of way), the exact opposite of “kiddy”. The aesthetic rubbed people the wrong way, sure… it did put me off at first too, I must admit. Bit I grew to love the style.

Has anyone else read this series? Do any other discerning adults read “children’s” titles?

Every Monday I’ll post a random, but fantastic, page from a Batman comic – this will improve all of our weeks.

No context, no commentary, just:

It is finally here, the holy grail of Batman stories relayed through DC’s, admittedly, pretty damn good animation wing. Woe is them, because adapting one of the most highly revered Batman stories of all time has to be a nerve-wracking experience. Taking something that so many know so well and trying to adapt it into a different medium is always tricky, but when you pile ravenous fanboys on top of that it tends to be a lose-lose situation. With that in mind, full disclosure:

I am one of those fanboys.

The Year One story is the first comic arc I ever read that shook me out of my world of comic book banality and made me feel something that great art makes you feel; inspired, excited, alive, amazed, etc. It is the first comic book I read that re-defined what a comic book could be for me. I’m not saying it was the first genuine work of art in the medium – far from it – it was simply the story that made me a comic book nerd for life. Suffice it to say, I hold the work dear and while I’ve been eagerly anticipating this animated adaptation, I’ve also been preparing myself for what I assumed was an inevitable disappointment. Well…

END_OF_DOCUMENT_TOKEN_TO_BE_REPLACED

Here are past reviews originally posted on the old site – all migrated here to this one convenient post.

END_OF_DOCUMENT_TOKEN_TO_BE_REPLACED

(from The Black Cat)

Every Monday I’ll post a random, but fantastic, page from a Batman comic – this will improve all of our weeks.

No context, no commentary, just: 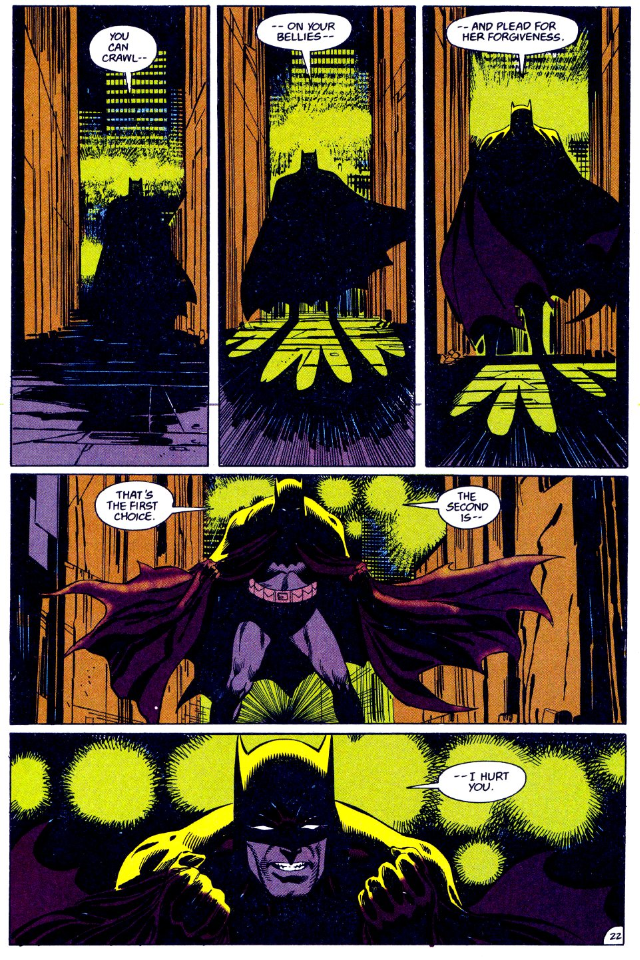 Since the DC Universe will be re-launched in just a few weeks (sob…), I thought now would be the perfect time to compile a list of the Top Ten Most Amazingly Badass Batman Moments. In order to really celebrate and perhaps even say goodbye to the “current” continuity we all know and love, I’ll only be utilizing the modern age of Batman which I grew up with to pull the moments on this list from.

What that means is that I’m using Frank Miller’s Batman: The Dark Knight Returns (1986) as a starting point and ending with Grant Morrison’s R.I.P./Return (2010) storyline – So this list encompasses a very small fraction of the overall Batman timeline. Yes, regrettably, all the great moments from the early 80’s and before will be left out – and whatever is currently happening in Batman Inc. or Detective Comics, etc. will also be absent from this list. Also – it has to be Bruce under the cowl for the moment to count. Sorry Dick, you were great, really you were – but you’re simply not The Goddamned Batman. Otherwise, anything is eligible for inclusion: one shots, out of canon stories and Elseworlds tales.

With the qualifying factors out of the way, let’s do a quick refresher; a run-down of sorts, and list some of Batman’s main attributes and skills. These will be important to keep in mind when considering all the numerous ways in which “Batman being a badass” could be defined. The entries on this top-ten list should be seen as reflecting my personal favorite moments which exemplify some or all of the qualities mentioned below:

With that out of the way, let’s not waste any more time, onward to the pretty pictures: