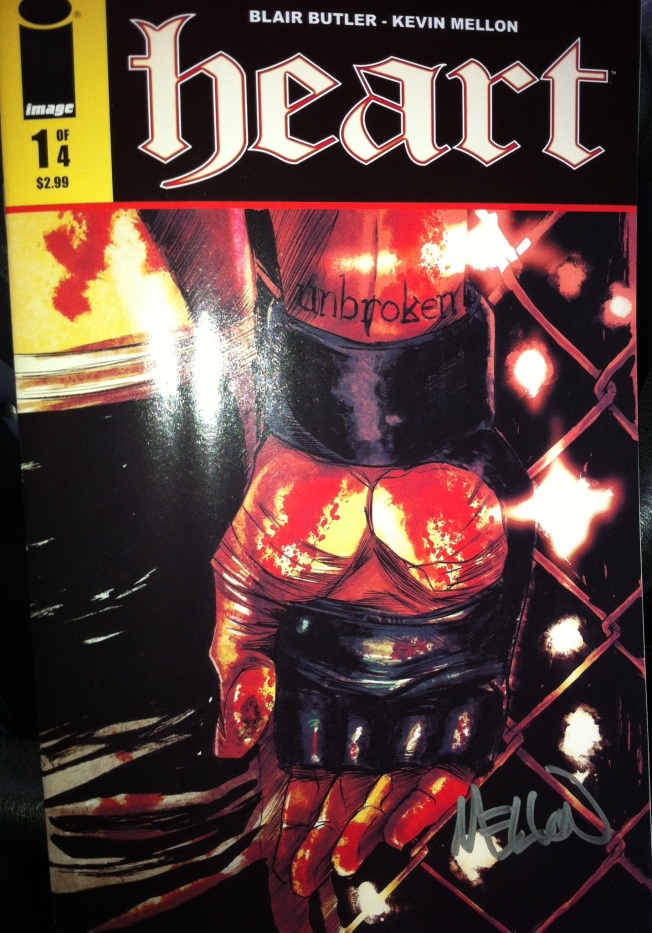 (please excuse my bad iPhone photography, I was just stoked to score a signed copy)

This book has a few things going for it that you may think would guarantee it a good review from me: it takes place in Kansas City (my home town, born and raised) and it is written and drawn by two KC natives…

However, this book also has a rather large hurdle to overcome with me as well: my almost negative interest in MMA fighting (that’s a whole other story). As you can see, the scales begin to balance out.

“Heart” is the story of Oren “Rooster” Redmond. We first meet him just as he is stepping into the ring to brawl with another MMA fighter. The story starts off steeped in “yeah bro” testosterone (a woman wrote this?!) and the character of Rooster is what basically amounts to an avatar of tropes paraded to us via the blunt narrative… he’s fighting, getting his ass kicked and stages a lucky come back… but wait… back up: That douche bag hissing through his teeth and talking about how much of a stud he is has slowly changed his tone. We see the doubt, the downright fear and humility wash over his persona through this seemingly trite opening fight scene. Without even really realizing it, we were witness to flecks of his façade literally being beat right off of him. Then the book really surprised me – because it had utterly subverted the whole overtly solipsistic and hyper-masculine virility it had pretended to present to us. The ridiculously machismo voice of Rooster has become deeply flawed, human and… sympathetic. Once Rooster pulls off a lucky win I was actually happy for the fucker. I must say, that’s a very good opening turn, Mrs. Butler.

We flash back to a few years before the fight we opened on to find Rooster trapped in the mundane drudgery of suburban office work; cubicle hell (in Overland Park no less, a touch that will tickle KC folks, I’m sure), a feeling I’m sure many readers will be able to relate to and empathize with. Rooster is overwhelmed by the ache to divorce himself from self-imposed banality; driven to shake himself out of the apathy that is his daily life. Rooster sees a way out, through an example set by his older brother, who is a successful, local MMA fighter. So then, the spark is ignited and slowly burns away at Rooster’s fuse until he finally summons the courage to make a proactive move, to actively attempt to change his lot in life. He decides to train, he decides to fight.

This is where my big revelation occurred; suddenly I realized MMA doesn’t matter in the slightest. MMA has simply become a proxy here, a proxy for reclaiming your life and the very act of feeling. Feeling alive, in control, human and free to live and die on your own terms. Rooster uses MMA to rebel against his benumbed existence – he uses it by allowing himself to get the shit kicked out of him in a ring in a desperate, last-ditch effort to feel something immediate, something real and explosive in his life – he uses it to feel anything at all.

Once this concept hit me, I was in love.

I have absolutely no real knowledge of MMA fighting at all, and yet I do not feel like I need any in the slightest to enjoy this story or to understand this world and its’ characters. I’ll even go so far as to say that this isn’t a story about MMA at all (even though it most obviously is)… it is simply a story about the absolute need to experience catharsis and freedom. These are the rudimentary and universally primal themes the story works upon, and as such, the story works beautifully.

As for the art, it has a scratchy and raw punk ferocity to it which suits the story perfectly. The stark, black inks manage to convey real weight, movement and energy. They’re deceptively simple, just like the story, it seems, but they are actually very articulate and convey a lot of emotion. I love the way you can still see the depth of some of the inks from their original pages, there seems to be some marker used in certain backgrounds too which creates a nice textural contrast.  The fight scenes are brutal and sharp and the “smaller” dialog scenes are clear and succinct: you can’t ask for much more.

I’ve been very eager to get out of reading so many super hero books every month and I’m finally starting to find some books that are good enough to divert my attention. I should also give props to Image for publishing this series – and a few other, non super hero books which I’ve enjoyed recently. It seems they’re doing some great work by producing unique, creator owned works, so bravo, Image.

I’ll be honest, I was not really sold on this; I planned to pick it up because I had heard a recommendation for it, but… I was expecting to be let down. I have since managed to be very pleasantly surprised. I really did love this book and I’ll be back next month for sure.