MANY SPOILERS AHEAD! TURN BACK NOW IF YOU HAVEN’T READ THIS BOOK!

Welcome back, Grant. How I’ve missed you! Sure, Snyder and Tomasi and a few others are making some good, maybe even great, Batman stories right now – but this, this is on a whole other level. This reminds me why I consider Grant Morrison’s Batman arc (which really started all the way back in Batman #655) to be the greatest Batman story ever told. The skill Morrison has been weaving this incredible long-con tale with is astounding. Now that we know who Leviathan is, going back and seeing how obvious some of the clues were is a bit embarrassing for me as a reader.

Here we have Leviathan Strikes, though what should have been two or three single issue comics was derailed by the “New 52” and collected (truncated?) into a single volume, arriving after a short hiatus. This of course causes some continuity gaffes, and as such, there is a handy disclaimer to help keep readers oriented: “The events of this issue take place before Flashpoint and the New 52.” Whew, now that that’s all sorted… Anyway, regardless of really showcasing how poorly thought out DC’s Crisis On Infinite Reboots was, what we have here, in this collection, is absolutely great – even divorced from and incongruous with the larger, semantic and arbitrary clusterfuck of current “universe” continuity.

The opening story with Batgirl infiltrating the Leviathan finishing school/death cult was fantastic; filled with the fun, energy and bombastically ridiculous high-concept plotting that all Morrison’s Bat work displays so ably. This whole story makes me really wish Babs hadn’t stepped back into the role in the New 52 book – Stephanie’s adventure here is better than all four issues of the new Batgirl combined so far in my opinion. I mean, she actually seems pretty badass here:

Also – The debut of Professor Pyg’s son is a riot and he’s nearly as creepy as his father – I really want to see a father/son villain team-up in the future from Morrison. 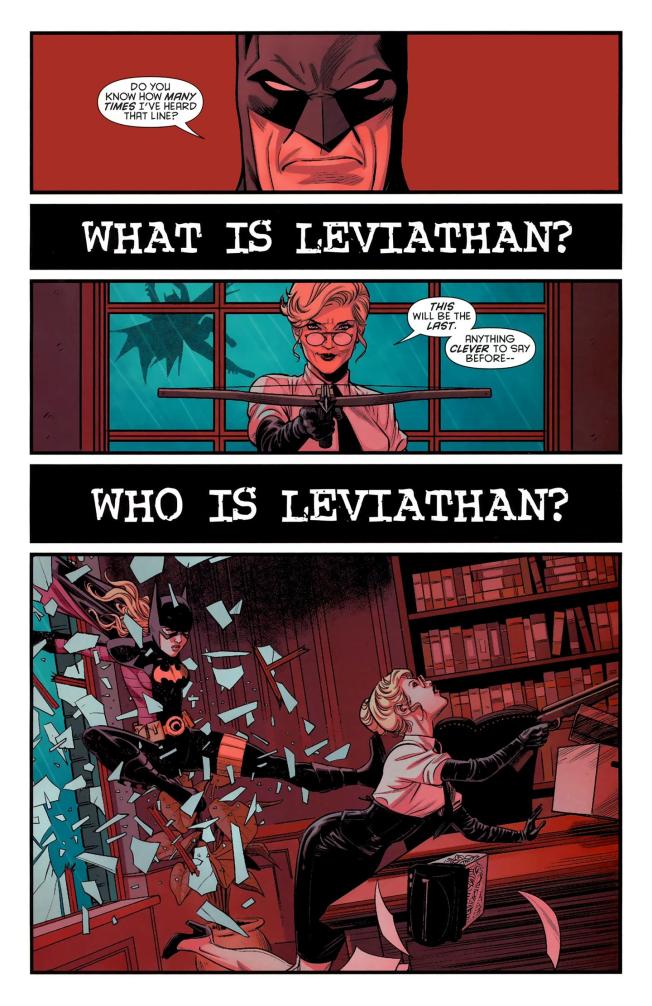 And really, since we now know Leviathan’s true identity, doesn’t this school to train female assassins seem like a big, obvious clue? Either way, the story is well paced, the characterizations are spot on and it was all as comfy as slipping right back into the warm, Batman Inc. bathwater after a short respite.

We also get to meet back up with Morrison’s Batwing, whose current book (written by Judd Winick) doesn’t seem to incorporate any of this into its continuity; we leave Batwing on a cliffhanger, or cloudhanger as it were, as he turns around to notice “Bat wings” closing in on him, obviously Talia’s Ninja Man-Bats. So how did he get from there to fighting Massacre in Africa? Who knows – and more importantly who cares? 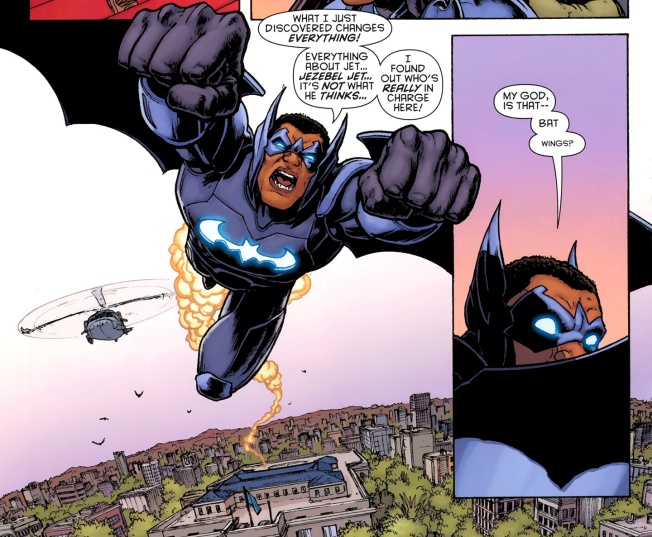 Because meanwhile, Batman, Dick-Bats, Red Robin and Robin are all trying to make their way through Netz’s twisted and elaborate Daedalus labyrinth death trap – and things begin to fracture.

We’re presented with Batman on the effects of a mind-eroding gas which causes time, space and his memories themselves to become pliable as Netz lures him deeper into his web for a kill. If you haven’t been paying strict attention to Morrison’s run, this part will be utterly discombobulating – hell, even if you have, if you haven’t re-read them recently (or looked through the handy timeline cheat-sheet in the back of this book) or if you haven’t read through Leviathan Strikes at least twice, you still may be confused. However baffling things may seem though, there is an incredibly strict lucidity here – the kind only Grant Morrison seems able to provide us with.

Back in the story, Netz very nearly succeeds in killing Batman, thankfully Damian comes to his father’s rescue. Speaking of: how heart-wrenching is that look on Damian’s face after he realizes he has broken his father’s biggest rule and attempts a feeble apology.

That single panel made me realize how much I miss Morrison being the writer who brings Damian to life; no one can capture his voice quite like the man who created him.

The re-introduction of Jezebel Jet is jarring and a delightful mini-shock before the grand quake occurs in the next few pages as Morrison finally lets the other shoe drop and reveals the true identity of Leviathan: Talia al Ghul.

Think back, re-read Morrison’s run from the very beginning (Batman #655!) and marvel at all the breadcrumbs that Morrison has been methodically laying down for us over the course of five years and multiple titles. This is the sort of fortitude I wish all comic book writers would bring to the medium, the care and planning which has gone into Morrison’s Batman story just bowls me over every time I think about it and/or joyously re-read it.

Morrison manages to not only tell an incredibly deep, layered and exciting story but he also manages the near-impossible: he makes the old cliché of “Batman has met his match” seem frighteningly sincere.

Both have made one common decision between them however, which is, historically, the only avenue anyone has ever been successfully able to take in order to defeat The Batman: that of the mind, attacking him mentally and physically to wear him down so much so that he loses his edge. There has been an indefatigable and ruthless series of near-constant mental attacks on Batman since Morrison came on board to tell this current story. The Black Glove and Leviathan have both made much use of mind-altering drugs to facilitate this unbecoming and the cracks are really starting to show n Batman’s constitution. With the Black Glove Bruce showed extreme confidence and it was us, the readers who doubted the character – now however, the confidence seems to be draining from Bruce – and suddenly, we the readers, are left with the feeling that the character is, for the first time in Morrison’s run, really doubting himself. Look at his face while he pleads with Talia over the phone at the end of this book: 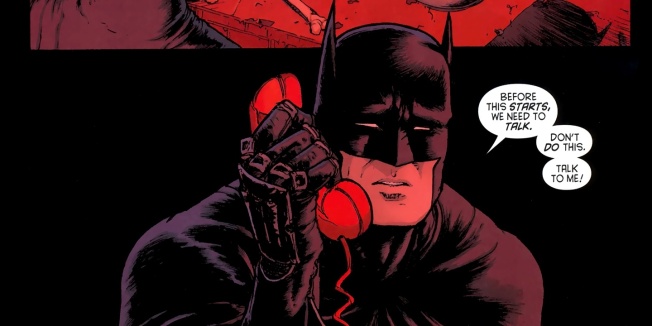 Well he should be too – because I’m going to posit a theory here that may be controversial and may in fact spoil the culmination of Morrison’s epic tale. Do not keep reading if you don’t want to listen to my crazy fan speculations!

Okay, you see, I’ve been picking up these breadcrumbs and where they lead me is straight to the death of Damian Wayne.

For your consideration: We know Talia has put out an insanely high bounty on Damian’s head, so everyone who has ever tried to kill a superhero will be gunning for the young Robin. Morrison has even stated in interviews that when we read the full Leviathan story we will “cry and cry and cry” (during his panel at SDCC ’11 he said: “Batman: Leviathan is about Bruce and Damian though, and you will cry and cry and cry.”) So what else is more apt to make people cry besides the death of Batman’s son and one of, if not THE, best new character(s) in the DCU?

How about this for the supreme twist though:

In order for Morrison’s story to take on truly tragic proportions Morrison will have Batman himself kill his son. Perhaps under the extreme stress of drug-induced mental collapse and not in control of his facilities Bruce is made to kill Damian. He breaks his one grand rule and he breaks it on his own son.

Tragic, because even if Batman eventually defeats Talia, Leviathan would still win, they would have succeeded in “destroying” The Bat. I would definitely cry.

Either way – I’m just going to enjoy the ride and try to contain my joy when Morrison returns regularly with his Batbook in 2012.

“Batman Inc. Leviathan Strikes” as a stand alone issue gets a final score of Five Out Of Five.

Morrison’s arc as a whole, even unfinished, gets an eleven out of five.

If you’re even remotely interested in Batman you must read Morrison’s run, starting all the way back with Batman #655!